how do you know when a painting is done?

i had a fabulous time talking with the lovely tamara laporte of willowing the other day for our upcoming life book interview. and one of the things we chatted about was, “how do you know when a painting is finished?”
and i thought about this painting. i titled it BE STILL MY HEART because it took so many layers and layers to create and get to the heart of it all.
this is the painting that i finished for a local group show titled 44 Presidents. i was assigned to paint a representation of US president andrew johnson. i knew that the painting didn’t have to look anything like the president, but even still, the process stunted my creative flow so much so that i wrote this post on ways of getting unstuck.
well, now i can share the entire process with you in photos from start to finish…

even the background went through a ton of different changes. after i’d covered up the white space, i decided to go red, white, and blue…figuring that the final piece would have nothing to do with a US president.

i came to this character and felt like it really had nothing to do with what i was supposed to be painting AND the only things i liked about it were that it was in my style and included feathers (which i’d been seeing and collecting everywhere and needed to include in a painting).
otherwise, i felt the painting had no reflection of me.

so, i covered most of the character up and went back to something i’m comfortable with and created an owl-inspiration.
yet, this felt so staged and unauthentic. the only thing i still adored were the feathers around the head.

so, of course i painted over it. and i used colors that were completely not president-like.

i started to have fun with it again and adored creating the colorful layers.

but when it came time to add characters again, i froze.
i’d just finished my piece MIND SPRING, and from that i got the abraham lincoln-style hat. i had two little birds going, so i figured…this will be cute. it’s going in a big gallery exhibit, people have to like it…so it should be cute.

and it did look cute.
i completely finished this painting and knew i could just call it quits. but not only did it not resonate with my heart, i saw that i’d been trying too hard to project something i thoug
ht others would like (which never works for me).
so i ended up feeling like i never wanted to see that painting again.

so i covered up the bird on the right. and in that new layer of paint i saw this giant bird.
it had been night time and the painting was just laying in the dark on my kitchen floor. i’d thought what i saw  was a hawk, since i’d been observing lots of hawks in my backyard. i grabbed an oil pastel and sketched in the outline, wings and beak.
it felt right. even though my mind asked, “what on earth are you doing?”

but the next morning, the rest of the painting fell into place. i couldn’t stop painting it until this eagle was done. and it’s pretty amazing to me, that after all of those layers, this bird became an eagle.
while i look at this painting and wonder where it came from, i know it’s the one that is meant to be in the group exhibit. i’m delighted my those hanging stars…i even added glitter to them! and somehow, that eagle resonates with me. i can feel it in my belly and in my heart.
that’s how i know when a painting is finished.
i know i can keep working on something and covering things up again and again. but if it resonates, that’s when I know i’m on the right track. and i make certain to step back when i’m at a point where i think it’s complete and ask myself if there’s anything more i can add or give to the piece. i know i can create a better painting. so i will take what i’ve learned from this one and apply it to the next.
i’ve learned that if i overwork something, the painting not only loses it’s initial spark, but i stop having fun with it. and for me, there’s no point in that.
do you have a way of telling when a painting is done? i’d love to know.
have a wonderful and inspired weekend!
xoxo
………………………

ps. i’m so excited for HOW TO CREATE WHIMSICAL ANIMALS to begin! this is going to be an INCREDIBLE class. i’ll have more sneak peeks of projects we’ll be working on together next week.
if you’re interested in painting animals together, find the details and register here.
7 Things That Make Me Smile 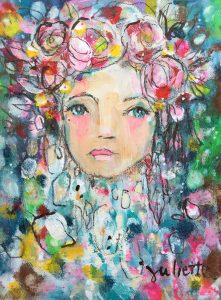 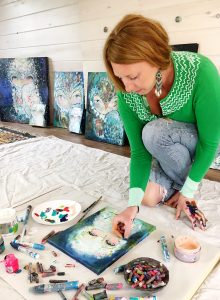 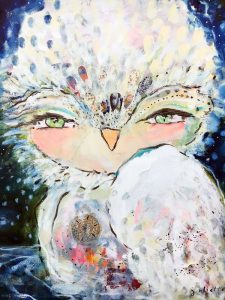 18 comments on “how do you know when a painting is done?”